That Million Dollar Color: How Companies Use Colors in Their Marketing & Branding Strategies

Think of your reaction when you see a hot pink or bright yellow car driving down the road…is that something you’d buy? Maybe not, but if those are your favorite colors, then you just might, as colors can affect us in different ways.

The use of color is all about persuasion. Businesses use specific colors in an effort to make a consumer identify with their brand or product. They do extensive research, not only on how to enhance the quality of their brand, but also deciding what colors work to help make an impact. Large corporations often work with focus groups to determine which colors work best in defining their brand.

So, let’s look at some colors, shall we?

The color black has many different associations, including mystery, fear, power, tragedy, prestige and elegance. In terms of power and elegance, you might think of a sports car, SUV or a limousine. While cars come in many colors, black seems to be one of the most, if not the most, popular.

Henry Ford capitalized on the use of black at the turn of the 20th century with the Model T, his most popular model at the time. Ford is quoted as saying: “Any customer can have a car painted any color that he wants so long as it is black.”

It should be noted that not all Model Ts were originally black. Between 1908 and 1913, some of the first models were green, blue, red and gray. All Model Ts were midnight blue by 1912, and from 1913 until being discontinued in 1927 they were only available in black. The Model T remained extremely popular, with Ford producing over 14 million of them between 1909-1927, with the majority being all black. The Model T was also affordable, giving many customers the ability to purchase what at the time was considered a luxury, or status, item.

The truth is Ford was using a quick drying paint that was only available in black. But along the way, he also implemented one heck of a branding style guide.

Why is Color Important in Branding, Marketing and Web Design?

While we have certain reactions to color, those reactions can also greatly impact decisions when making a purchase. Will a specific pair of shoes look good if they’re black, orange or blue? Would you buy a grey or purple suit? Think of a specific logo you’ve seen; if the colors were different, would it have the same effect on you…McDonalds with purple arches, for example? 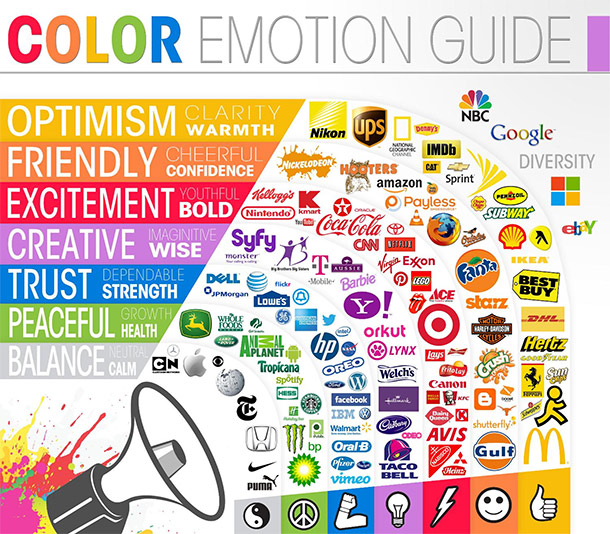 
In 2006, Satyendra Singh of the University of Winnipeg published a study entitled Impact of Color on Marketing that explored consumers’ relationships with certain colors. The study noted that most individuals often “make up their minds within 90 seconds of their initial interactions with either people or products.” According to Dr. Singh, roughly 62%-90% of this assessment is based solely on colors alone.

The study also mentions “managers can use colors to increase or decrease appetite, enhance mood, calm down customers, and, reduce perception of waiting time, among others.”

According to one study, 84.7% of consumers state that color is the main reason that they buy specific products, while 80% think that color helps to increase overall brand recognition. In a breakdown of what appeals to consumers, 93% will consider the visual appearance of the product, while 6% consider its texture. Just 1% will make their decision on the item’s sound or smell.

Different colors affect us in different ways. Some of us might prefer a bright blue sky, while others might find a grey overcast sky to be particularly soothing. There are often emotional reactions to certain colors: they can enhance your mood, they can be uplifting or depressing, and in some cases create feelings of nostalgia. If you had a Radio Flyer wagon as a kid that you loved, then you might be naturally drawn to things that are red.

One study, called The Interactive Effects of Color studied the role that color plays in branding. It found that the relationship between colors and brands and the effectiveness on purchasers really came down to whether people felt that the color being used for the brand was appropriate for what the brand represented, i.e. did the brand fit what was being sold.

Another study, called Exciting Red and Competent Blue, found similar findings – that it was less about the color itself, and more about whether the color fit the brand and therefore made it trustworthy.

Colors & What They Communicate in Marketing & Branding

What Does a Color Mean to You?

Here are a few examples of certain colors and how they’re used with specific products and brands.

Yellow: The brightest color on the spectrum, many consider yellow to project optimism. It’s also associated with joy, spontaneity, happiness, affordability, and intelligence. Many fast food companies use yellow as a way to draw in customers, enhancing their feeling of happiness for food to get them to eat, since it’s bright and cheerful. Yellow is also used to grab one’s attention. McDonalds uses it to great effect with their golden arches, while Sonic, Burger King, Johnny Rockets, Shell, and Subway all incorporate yellow in their color scheme. Other brands that use yellow in their branding include Nikon, UPS, IMDB, Best Buy, Hertz and IKEA.

Red: Red is known to stimulate the craving of food, based on how it influences our metabolism. It also communicates excitement, strength, power, passion, and energy. It’s also seen as a high-arousal color, inspiring people to take impulsive risks. CNN, Virgin, Netflix, You Tube, Target, Nintendo and Coca Cola all use red as their primary color. Restaurants such as Hardees, Pizza Hut, Weinerschnitzel, and Popeye’s use red to help stimulate appetite.

Blue: Blue is considered a trustworthy color that depicts stability, intelligence, tranquility and wisdom. Blue is also the most used color in logo design, appearing in over half of all logos. Restaurants tend to use blue in an effort to relax their customers, giving them the option to spend more time in dining establishments where they may be open to ordering larger meals, alcohol, coffee and desserts, therefore increasing overall sales. Many finance and technology based businesses such as Twitter, LinkedIn, IBM, ATT, Intel, GE, Skype, Nokia, Philips, HP and Samsung use blue because it promotes productivity and a feeling of trust.

Orange: Orange is an invigorating color, yet considered a bit friendlier than red. It’s a color that often communicates affordability and luxury, as well as creativity, excitement, happiness, and success. Orange often appeals to impulse shoppers, as it offers a cheerful and confident vibe. Companies such as Nickelodeon, Home Depot, Penguin Books, Kayak, Stihl, and Harley Davidson use orange to great effect.

Orange is also a dominant color for many professional sports teams, especially in their logos. The NY Knicks, NY Mets, Miami Dolphins, Cincinnati Bengals, Chicago Bears, Baltimore Orioles, Detroit Tigers, San Francisco Giants, Philadelphia Flyers, Anaheim Ducks, Boston Bruins, NY Islanders, and Texas Longhorns, are just a few with orange themes. The athletic teams at Syracuse University have been called the “Orangemen” and “Orangewomen” for decades; Orange is the university’s official color and their mascot is known as Otto the Orange.

Green: Many eco-themed businesses use green as their primary color. Green often makes one think of vegetables, organic foods, nature, and with darker greens, of course, money. However, it also symbolizes harmony, safety, hope and peace. Green is also seen as a relaxing color that promotes tranquility and can help alleviate depression. Think of stores, such as Sprouts and Whole Foods that promote organic food and healthy living. You’ll find green used to great effect with businesses such as Land Rover, BP, Starbucks, Lacoste, Tropicana, Animal Planet, The Girl Scouts, 7Up, Holiday Inn, John Deere, the Green Party and, of course, the recycling symbol.

Purple: Purple is often associated with creativity and imagination, as well as extravagance, royalty, mystery and luxury. Purple also evokes the feelings of being cutting-edge and wise. It has a soothing effect and is often associated with anti-aging and beauty products, such as Nivea, for example. Yahoo!, Hallmark, Cadbury, Syfy, Taco Bell, and Welch’s are just a few companies that also use purple in their marketing and logos.

Choosing the Right Color for Your Call to Action (CTA) Buttons

Color also plays an important role in web design, especially when creating a Call to Action (CTA) button. Neil Patel has an interesting post on the whole psychology behind Call to Actions, which goes well beyond color theory alone, and explains how our brains are already pre-wired and actually seek out a call to action that leads them where they need to go.

With any call to action, you want to grab your customer’s attention. Using certain colors can help guide your followers into making certain choices, such as downloading an eBook, filling out a form, or making a purchase. While red often stands out among other colors, some businesses use orange, because it can be construed as a bit more friendly.

Some of this relates to color contrast and how colors complement others. Wherever you have a CTA button, you want to use a color that stands out and grabs the viewer’s attention. Because red is such a vivid color, it tends to stand out more. But that doesn’t mean you always have to use red for a CTA button.

If your text is red and in your web design your page/section is red, obviously a red button won’t work. And sometimes red just isn’t the right choice. Thinking in terms of the color wheel, a high contrast color to your main color scheme will often be a good choice for the CTA.

There is a psychological principle known as the Isolation Effect which basically says that an item that “stands out like a sore thumb” is more likely to be remembered. People are able to recognize and recall an item a lot better (and that pertains to both text and images) when it completely sticks out from the other elements around it.

Because the effective use of color for CTAs will vary from campaign to campaign, and brand to brand, one great way to discover what works best is to do some A/B testing. In our marketing campaigns for clients, we find that A/B testing, and various analytics programs, are some of the best ways to decipher what works best for marketing.

And remember there is no perfect color. Most important is finding colors that align with your brand, and then choosing accent colors that have a high contrast to those. Smartly chosen colors can greatly impact the overall user experience with your brand. So, break out the color wheel, do some testing, and pick wisely.